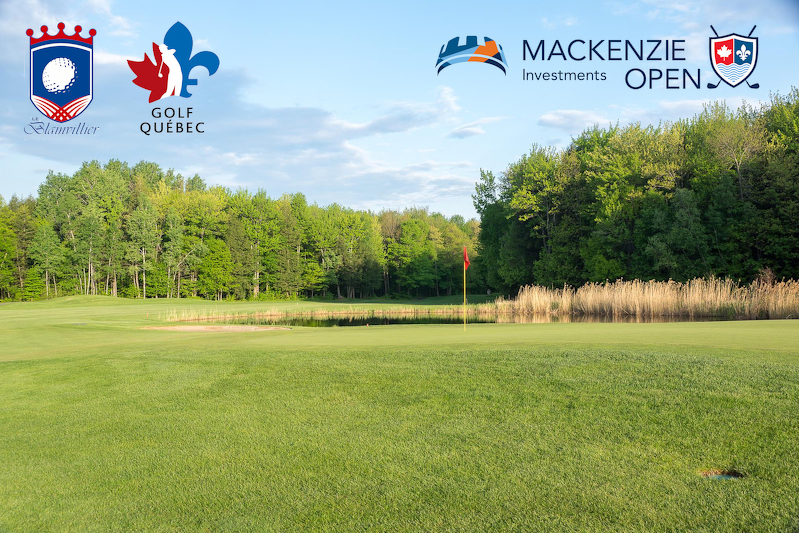 As part of its multi-year partnership with the Mackenzie Tour – PGA TOUR Canada, Golf Québec is proud to announce that Le Blainvillier will host the 2020 Mackenzie Investments Open from September 7 to 13.

Located in the northern suburbs of Montréal, in the heart of an immense natural wooded area, Le Blainvillier is a 36-hole private golf club with an outstanding reputation. With two championship courses offering exceptional playing conditions, Le Blainvillier is a great challenge for golf enthusiasts of all levels. For the Mackenzie Investments Open, competitors from around the world will play the Heritage course. www.golfblainvillier.com/

"We are extremely excited to team up with Le Blainvillier, we feel like the players will enjoy the golf course and the fantastic facilities," said Mackenzie Tour Vice-President Scott Pritchard. "We'd like to thank Elm Ridge Country Club for their hospitality the past two seasons, hosting the Mackenzie Tour's penultimate event."

“Golf Québec is honoured to partner with Le Blainvillier, but ultimately we are most excited to provide playing opportunities to the top players of the province in an international field,” said Éric Couture, Tournament Director of Golf Québec. “We are confident that our host club will provide an exceptional challenge to all competitors”, he added.

The 2020 Mackenzie Investments Open will be comprised of a field of 144 players. Following the tournament, the top-60 players on the Order of Merit will earn a spot in the following week’s Canada Life Championship, the final event of the season which grants Korn Ferry Status to the top-10 players on the Mackenzie Tour. A select number of sponsor exemptions will be awarded to Québec based players, which will be announced at a later date.

The membership of the Mackenzie Tour will once again look to make the next step on the path to the PGA TOUR by leveraging their performances into advantages to reach the next level. The season-long points winner will be fully exempt on the Korn Ferry Tour for the following season, with those finishing in the second-through-fifth positions earning conditional status. Players who finish in the Nos. 2-10 spots will also earn an exemption into the Final Stage of the Korn Ferry Tour Qualifying Tournament, while Nos. 11-25 on the Order of Merit will earn an exemption into the Second Stage of the Qualifying Tournament.

About the Mackenzie Tour-PGA TOUR Canada

The Mackenzie Tour - PGA TOUR Canada is a series of tournaments played across Canada and the United States each summer, where tomorrow’s stars begin the path to the PGA TOUR. The leading 10 point-earners at the end of each season earn status on the Korn Ferry Tour for the following year. The Tour’s alumni include 41 PGA TOUR players and 232 Korn Ferry Tour players since 2013. The Mackenzie’s Tour mission is to provide a high-quality platform to produce alumni that move to the next level and eventually the PGA TOUR, while making a positive impact in the communities where tournaments are played.

Founded in 1920, Golf Québec is provincial sport federation whose mission is to increase participation in golf and develop excellence. Some of Golf Québec’s core services include the Golf in Schools Program, Future Links and its Get Linked initiatives, the First Drive Tour, Junior Golf Development Centres (JGDC), Rules of Golf, World Handicap System, course rating services, Golf Fore the Cure, as well as the Québec Golf Hall of Fame. In addition, Golf Québec conducts regional and provincial championships to bring the local golf enthusiasts to surpass themselves and eventually reach the upper spheres of professional tours. For more information please visit www.golfquebec.org.