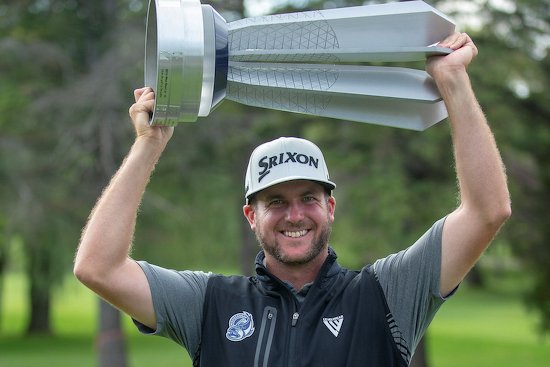 MONTRÉAL, Québec — Entering the final round of the Mackenzie Investments Open with a five-stroke cushion over Kyle Mueller, Taylor Pendrith made the turn on Sunday at Elm Ridge Country Club and the mood shifted from ‘will he do it?’ to ‘how many will he do it by?’

In the end, Pendrith tapped in for par on the final hole to shoot a bogey-free 67, giving him an eight-stroke victory and his second Mackenzie Tour – PGA TOUR title of the season and his career.

“It was definitely the best week of tournament golf I have ever played,” said Pendrith, who moved to second on the Order of Merit with the win. “I honestly don’t remember playing from the rough on the weekend, maybe once or twice, but my wedge game was dialled in, especially today.

“I kept my head down all day,” added Pendrith. “I figured I was leading but never knew by how much. I was debating hitting iron on No. 17, it’s a tough tee ball, but I decided to hit driver because it was downwind and I hit 8-iron on the green and made a two-putt birdie. After that I knew I was going to win.”

“That was definitely the most under par I’ve ever been over four days,” said the 28-year old. “It was a great field out here and there are so many players who could compete on the Korn Ferry Tour and the PGA TOUR, but to win by eight feels really good.”

With the eight-stroke victory, Pendrith matched the largest margin of victory in Mackenzie Tour history, a feat previously accomplished by Lee McCoy at the 2017 Canada Life Open and Hank Lebioda at the 2017 Mackenzie Investments Open.

“This just gives me tons of confidence,” said the Richmond Hill, Ontario native. “My game is really sharp right now, so If I can continue playing the way I have been then I have no doubt I will have a chance to win on the Korn Ferry Tour next year.”

The win adds an extra layer of excitement to an already compelling season-ending Canada Life Championship. While, historically, the Player of the Year Award and full Korn Ferry Tour exemption has been decided before the final event of the season, the top spot is still very much up for grabs.

“To be fully exempt on the Korn Ferry Tour next season would be a big relief,” said Pendrith, who sits just over $5,000 behind Order of Merit leader Paul Barjon “There’s still work to do next week in London, I know it’s super close, there’s three or four guys who could do it, so there’s a lot of pressure but it’s just golf and I’ll go make as many birdies as possible and see how it ends up.”

Pendrith, who has never shot a round higher than 68 in eight rounds at Highland Country Club, says it is his favourite course on the Mackenzie Tour.

“I love that place and I’ve played well there before,” said Pendrith. “My game is in a good spot right now, so hopefully I can keep the momentum going,” added Pendrith who’s best finish at the Canada Life Championship is a tie for 8th in 2015.

“I knew my game was there in 2015. I was competing and having chances to win, and this year I broke through and won in Edmonton and then to win here is awesome and to have such a great week and to shoot 28-under feels really good. Everything kind of clicked this week.” – Taylor Pendrith

“You don’t shoot 10-under every day, I was lucky enough to do it two days in a row, so that was kind of cool. I made a ton of birdies and to win by eight feels awesome.” – Taylor Pendrith

“I honestly feel very comfortable over every shot, even the shots where in the past I haven’t, so I’ve been attacking pins and have had a ton of birdie putts. I maybe missed just one or two greens all weekend, so the wedge game was on and so was the putter.” – Taylor Pendrith

“Pendrith just hit so many good shots. He was never out of position and, if he was, he would get himself back in position. He hit so many mid-irons tight, so many tap-ins. He shot 28-under but he missed a few five or 10-footers that could have gone, it could have been 35-under, he just made it look so easy.” – Kyle Mueller

“I’m disappointed I didn’t get the win and wish I gave a bit better of a run today than I did, but hats off to him and he played phenomenal. It’s tough to keep up with somebody who went 20-under over two rounds.” – Kyle Mueller

“I actually, I feel like an idiot, from the fairway I lasered the grandstand long and so that’s why I flew the green on the last and I couldn’t believe I did. I was a bit nervous, you’re never happy finishing second, but it’s a small win to make par and place second.” – Kyle Mueller