Raoul Ménard ties for 3rd and leads the Québec field 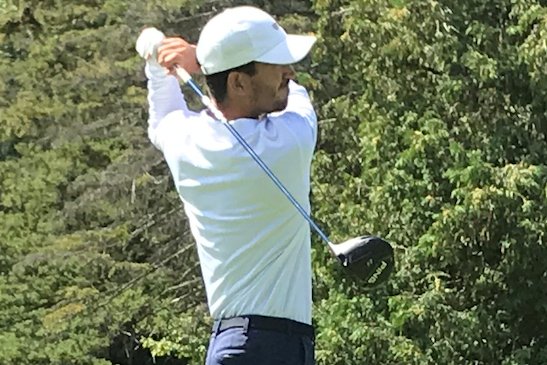 Raoul Ménard ties for 3rd and leads the Québec field

Playing in the second group of the day, Mueller got off to a hot start with birdies on his opening two holes and later added an eagle and a birdie on hole Nos. 8 and 9 to make the turn in 31 strokes.

“I hit a lot of fairways and a lot of greens and made a couple mid-range putts,” said the 23-year old. “I hit some iron shots close, which really helps, and it was great being the second group off, with perfect greens, making scoring conditions pretty easy with the wind down.”

Finishing his round strong, the second-year professional made back-to-back birdies on his final two holes of the day to card the 64, a score he has bested only once on the Mackenzie Tour, when he made his professional debut at the 2018 Windsor Championship and carded a final-round 63 to tie for 11th.

Trending in the right direction over the past two months, 20 of Mueller’s past 21 rounds on the Mackenzie Tour have been played in 71 strokes or less.

“I got off to a rough start the first half of the season, but I’ve been battling my way back,” said the University of Michigan alum. “My game still doesn’t feel 100 percent, but it’s trending, which is nice.”

During his time as a Wolverine, the Watkinsville, Ga., native picked up five individual victories and was named first-team All-Big 10 Conference three years in a row. Mueller was also a semi-finalist for the Jack Nicklaus Award his junior year.

Despite his successful amateur career, Mueller says adjusting to life as a professional has been a process.

“I thought it was going to be an easier transition than it was,” said Mueller. “The guys out here are really freaking good. You look at the board and 8- or 9-under par is always leading early, so you really have to come out here and post some numbers.

“There’s nothing easy about it, and I’m starting to make that transition and things are starting to get a little bit better,” added Mueller.

Sponsor exemption Raoul Ménard is the low Canadian following the first round of play, leading the hunt for the Canada Life Canadian Player of the Week Award following an opening-round 66.

Making his 11th-career Mackenzie Tour start, Ménard, who hails from Québec City, Québec, is looking to improve upon his career-best Mackenzie Tour finish, when he posted a second-round 64 on his way to a tie for 27th at the 2017 National Capital Open.

“This is one of the best starts I’ve gotten off to. This year, I got off to a pretty good start in Windsor but played poorly going into the weekend. Out here, you have to play well every round and keep the foot on the gas. It definitely helps getting off to a good start, and I’ll hopefully make some more birdies [Friday].” – Kyle Mueller

“I put a lot of good work in during the off weeks. I took a little break from the game but then got a lot of stuff figured out that had to be cleaned up around the greens and off the tee. So, to take care of business at home, it was nice to come out here and play well today.” – Sam Fidone

“I took a bit of time off for Labor Day, but I knew I had put in good work and I was in the right mindset to do it. I kind of wore myself out in that Texas heat a little bit; it was a good off week.” –Sam Fidone

“I had some tee trouble before, and I wanted to do some work to clean my game up around the greens and I definitely got it figured out today. I hit the driver absolutely amazing, so I set myself up with a lot of good opportunities, especially on the par-5s, and I made a lot of putts, as well.” – Sam Fidone

“There’s no doubt the par-5s are gettable. I made two eagles on the front (nine) today on them. Other than that, the course is pretty straightforward, and if you miss fairways it’s not easy. But I hit it so well off the tee to make it easier on myself today.” – Sam Fidone

“I just played solid, and the putter was really warm, so I rolled it very nicely and hit a few good wedges. I had to recover a little bit at the beginning, but I managed to get the best out of it and had a clean card, so I’m pretty pumped about it.” – Raoul Ménard

“I’m very excited to be here. Last year I didn’t play here, and this year I really wanted to be a part of it. It’s a golf course that looks like mine at home, Pine Grove, it’s a place I like and not too far away, so I can’t ask for much more. It’s fun to have the Mackenzie Tour around.” – Raoul Ménard

“I got conditional status on both PGA TOUR Latinoamerica and the Mackenzie Tour but was just far enough away to not get into any events (in Latin America), so I’ve been chasing Monday qualifiers on the Korn Ferry Tour and Mackenzie Tour. It’s been tough to build momentum, but now I’m starting to really find my game and I’m looking forward to the rest of the week and trying to make a charge at Q-School.” – Raoul Ménard

“I focused pretty well out there and had a really nice day, it was really fun. I tried to play a little bit during the off weeks but took about three or four days off. I did a lot of putting and tried to get on the course a little bit, but I did most of my practice when I got here on Sunday.” – Evan Harmeling

“There were good vibes in the group. Matt (Naumec) made birdie on the first hole, he made a good putt and we all just made a ton of putts out there. It was pretty ridiculous actually. We were talking about the footage holed from the group. It was pretty outrageous.” – Evan Harmeling