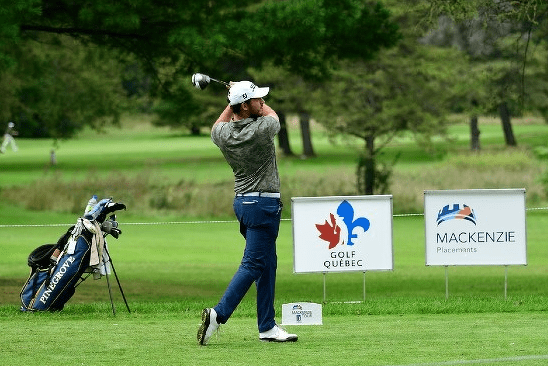 MONTRÉAL, Québec — For the second time this season, a scorecard with Taylor Pendrith’s signature has been framed in a Canadian pro shop due to a course record on the Mackenzie Tour – PGA TOUR Canada.

On Friday afternoon at Elm Ridge Country Club, the Richmond Hill, Ontario native carded a 62 during the second round of the Mackenzie Investments Open, the same course-record setting score he managed during the final round of the 1932ByBateman Open in Edmonton, Alberta to pick up his first Mackenzie Tour victory.

“I’ve been playing really well the past two or three months and I wanted to keep it going. A nice round like today will put me in position for the weekend,” said Pendrith, who, at 13-under for the tournament, is tied at the top of the leaderboard alongside round-one leader Kyle Mueller. “Hopefully I can back the 62 up with something good tomorrow.”

Beginning his round on the back nine, Pendrith got off to what he called a “slower start,” hitting good shots into his first two holes but narrowly missing mid-range putts, which, he says, was déjà vu from Thursday’s 69.

Though he made birdie on the next two holes, the real fireworks began on his eighth hole.

Using his length to his advantage, Pendrith hit flip wedges into the next two holes, setting up easy birdies, and then made another birdie on the third hole, a par 3, for his fifth-consecutive circle.

Adding an eagle on No. 4, suddenly the 29-year old found himself 9-under through 13 holes.

“All year I’ve been trying to stay patient because I know if I hit good shots I’ll be rewarded,” said Pendrith, who played the 10-hole stretch from No. 17 to No. 8 9-under par. “The wedge game was good, and I made all my five footers for birdie, so it was a great round and an especially good mid round.”

Though Pendrith made bogey on his final hole of the day, birdies on his 16th and 17th holes led to his third Mackenzie Tour 62 of 2019 and fourth of the past two seasons.

Currently fourth on the order of merit, a win on Sunday could bump Pendrith all the way up to the second position heading into the season-ending Canada Life Championship.

“You can kind of get sidelined looking at the order of merit, but I’m at a good spot going into the weekend,” said Pendrith, who finished third on the Mackenzie Tour order of merit in 2015. “I have no idea what the other guys are at, but I’m going to go try to win the golf tournament and see what happens at the end of the year.”

Currently six strokes ahead of Raoul Menard, Pendrith is in prime position to pick up his sixth Canada Life Canadian Player of the Week Award of the season.

“It was pretty simple, I hit fairways and greens. I started on the back nine and hit a nice shot into No. 12 to four feet and it almost went in. I made a simple up-and-down on the next hole for birdie and stole one on No. 15, hitting it to seven feet from 205-yards out. I hit it to six feet on No. 2 and hit No. 4 in two and two putt. Unfortunately, I made a bad bogey on the last, but besides that it was a good run.” – Kyle Mueller

“I’m looking forward to the weekend. My game is in a good spot and I’d like to clean up some of the unforced errors, but there weren’t too many bad shots out there. I know the rest of the way will be a grind but hopefully I can put another two good rounds up.” – Kyle Mueller

“Yesterday, you look at the card and see 5-under, but I called my coach last night in a panic, like, I cannot keep playing like this. I scrambled my way around and it was a little bit better today, putting well, chipping well, I just know that I don’t quite have it off the tee, so I’ve been missing in the right spots to give myself a chance to stay in it. When I do get an opportunity and make a good swing, I’ve been able to take advantage of it. It hasn’t been the prettiest, but it’ll continue to get better.” – Ryan Ruffels

“Right now, I don’t feel so comfortable in a left-to-right wind, so when I do get that wind, regardless of the hole, I hit a 3-wood because I find that easier to draw into the wind. I kind of pick and choose the holes I want to play aggressively. When all things are firing well, I tend to be pretty aggressive, but right now I have to be a bit more picky.” – Ryan Ruffels

“After next week I’m going to be going back to play some PGA TOUR Latinoamerica events, so, to have a chance to earn some Korn Ferry Tour status right now, it would be huge to have a good finish at this event before going to London.” – Ryan Ruffels

“I’ve putt pretty well and I’m missing in the right spots, but I’m hitting it everywhere. I’m standing on the tee and trying to pick which rough I want to hit it in, so I’m going to go work on that later. I’m putting it well though and the short game is good, so I have to just keep it going.” – Ian Holt

“There’s a lot of motivation right now to take the pressure off next week. It’s hard going into next week knowing you have to top three or top five instead of just going to play. I’m definitely looking for a good week here.” – Ian Holt

“I feel like my game is better than last year, but on the flip side, I feel like I haven’t really taken advantage of the opportunities I’ve given myself, especially on Sunday, so I’m going to try to change it this weekend.” – Ian Holt

“I’m happy with where my game is at the first two days. I need a good week this week and I’m off to a great start. I’m going to try to keep it rolling this weekend. There is definitely some motivation. I know I need to be in the top 10, so that is definitely the goal and I’ve put myself in a pretty good position, so I’ll stick to the game plan and see what happens come Sunday.” – Billy Walthouse

“It would be awesome and cool to make it to London, that was a goal of mine at the beginning of the season, so to have a crack at it this week is good. I like where my game is at and being able to get to play in London would be a huge accomplishment for the year.” – Billy Walthouse

“We’ve been solid off the tee and my caddie has been really good this week, I’ve been getting good numbers that we agree on. Off the tee, I’ve been keeping myself in play so I can get it in good position on the green and I’ve made some good putts. Yesterday I only hit 12 greens and shot 5-under, so the short game has been pretty dialled in. I haven’t made a lot of mistakes, so I’ll keep plugging along and sticking to the game plan.” – Billy Walthouse

“Today was better than yesterday, yesterday was decent, but after I walked off the course I felt like I could shoot even or better and that was my goal today.” – Rebecca Lee-Bentham

“I feel like I hit it a lot better today and gave myself birdie chances, but I had so many lip outs, which was frustrating, but my caddie kept me in check and it was nice to finish with a birdie.” – Rebecca Lee-Bentham

“I didn’t actually have any birdies with any wedges or on the par 5s, they all came from long irons and hybrids, which is funny. I jokingly said I should just lay up to hybrids every time. I didn’t actually hit them that great, I missed a few, but it was alright.” – Rebecca Lee-Bentham